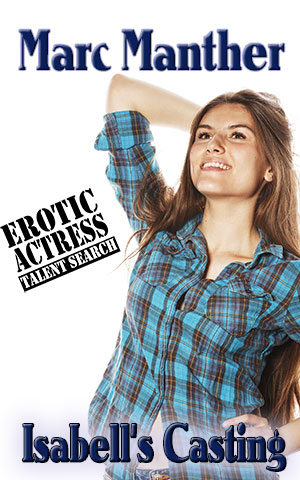 This time it took a little longer until a new story of mine appeared. The reason: I was working on the conception of my first book series. Therefore I intensively dealt with the genre ENF (Embarrassed nude female). If you read this blog regularly, you know the first results of my reflections on the genre. I think that nowhere in everyday life the topic finds its place better than in the countless casting shows that are currently on TV.

This is what the first volume of the series is about:

But soon she understands the mechanisms of the show. The television producers want to elicit emotions. They use every means to do so. Isabell is provoked with intimate questions and made to go completely beyond her own shame boundaries.

EATS focuses on getting its participants into embarrassing situations. The show deliberately provokes the scandal by constantly crossing the shame line and publicly humiliating the young women under the guise of professionalism.

I’m in the spotlight on stage. Alone, except for the cameraman with the Steadicam, who records my every move. A second, fixed camera is down in the central aisle. It also flashes red, as a sign that it is recording.
Below me I feel the rough, cold wooden floor. I have decided to do without shoes and stockings in this casting. Barefoot in jeans. I hope that looks sexy. The top three buttons of my linen shirt are open. I wear it over my pants because it looks more casual. I’m wearing a dark brown vest, bohemian type. They’re looking for guys, I know that because I love watching casting shows myself. The better the participants fit into a drawer, the better their chances of success.
There are four jurors sitting in a row in the theatre. A small floor lamp ensures that they can read their papers. Otherwise, it is dark in the auditorium.
Damian Petridis, a Greek director who has lived and worked in Germany for years. He landed a surprise hit last autumn and is now considered the hope of German film. It is said that he is looking for a leading role in his new film. He is the head of the team. Exudes an almost arrogant composure. Leaning far back, his arms crossed, he assesses my body. I feel his eyes undress me.
Jeanette Rasmussen is sitting next to him. She had her first acting experiences in a soap opera, but now she plays more and more in movies. I like the way she puts on her characters: always a bit shy, always a bit rebellious. All the more surprising when she suddenly appears naked on screen. That’s what makes her successful. She mainly gets roles like this where there’s a lot of skin to be seen. That’s probably why she’s on the jury. She smiles trustingly at me, nods when I say something.
Allegra Ricci works as a model. I’m not sure why she’s sitting here. She obviously likes herself. Blonde, tanned, shoulders back, chest forward. Perfectly made up, though understated. She doesn’t pull a face when I talk. She also appraises me, but unlike Petridis. I feel that she evaluates my every move: The way I stand. The way I hold my arms. The way I tilt my head slightly to one side.
And then there’s Shervin Datis. Narrow face. Three-day beard. He’s gonna be the acting coach of the season. He seems interested. As if he hopes to discover something special about me. His arms are on the back of the chair in front of him. His gaze is friendly but intense. I feel that I want to work with him. That I trust him.
“Isabell, how often do you meet a guy before you go to bed with him?” asks Patridis.
I cringe. You want to shock me. Test my reactions to such intimate questions. I notice how my stomach contracts. Don’t blush now. Stand up straight. Smile.
“It’s different,” I say. “For me, there’s no fixed plan. Not too fast, usually. Otherwise, they think I’m easy.”
“But you know how to use your body, don’t you?” Allegra asks.
I smile sheepishly.
“what do you mean?”
“By your clothing, you give them an idea of what they’ll miss if they don’t get in touch with you.”
“You mean the open buttons?”
“Yes, for example. You’re wearing a shirt that stretches slightly across your chest. The trousers highlight the bottom and emphasize your long legs. You know you look good, and you show it. But that’s not bad. Models need confidence. But they shouldn’t show it too openly, otherwise, they look arrogant.”
I’m nodding. Feeling see-through.
“Show me your Venusian mountain,” Petridis addresses me.
My heart pounds wildly and my hands get clammy. OK, of course, I know that as an actress I have to shoot nude scenes too. That’s normal nowadays. But here at the casting? With the cameras rolling? I was expecting to go on stage in a bikini in a few minutes. So they could see my body. But it’s one thing to show my intimate area.
“What?” I ask quite simply.
“I would like to have a look at your mound of Venus”, Petridis repeats with serene naturalness. “Or are you embarrassed?”
“You want me to take my clothes off?”
“I just want to see your shame.”
“Or test my shame threshold,” I think. I take a deep breath and try not to let my hands tremble.

End of the reading sample

In the preferences you can learn which cookies we use or turn them off.

This website uses cookies so that we can provide you with the best user experience possible. Cookie information is stored in your browser and performs functions such as recognising you when you return to our website and helping our team to understand which sections of the website you find most interesting and useful.

Strictly Necessary Cookie should be enabled at all times so that we can save your preferences for cookie settings.

If you disable this cookie, we will not be able to save your preferences. This means that every time you visit this website you will need to enable or disable cookies again.