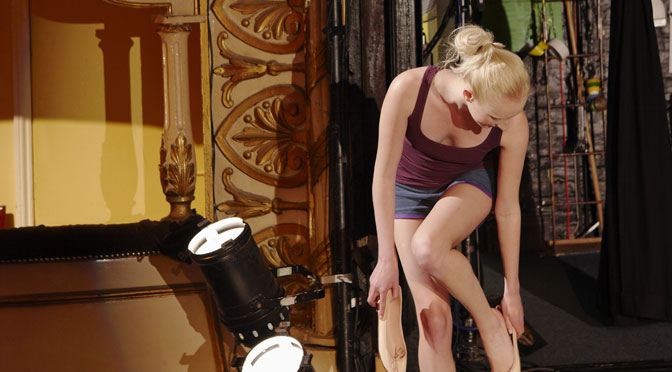 We talked elsewhere about the fact that Sandra and I have a few subgenres or niches that we particularly like to serve. These include ENF: Embarrassed Nude Female. “Nude Female” – “Naked Woman” goes without saying. Embarrassed includes the whole range of “being ashamed, humiliated, mortified, abashed, disgraced” – that state of mind that is the consequence of involuntary nudity.

If ENF is well done, we empathically suffer with the protagonists. And thus have the basic prerequisite for any good story: conflict. Without conflict, a story just doesn’t work. That’s why beginner eroticism often reads so boring: two people get to know each other, love each other, they fuck each other. No conflict, no tension, no reason to read on. No, life doesn’t write the best stories.

There are many reasons why a woman suddenly stands naked involuntarily. Repeated a thousand times in the meantime is the scene in which a woman stands in the shower, rings the doorbell, wraps a towel around her body, goes to the door. The wind slams the door, the towel is stuck, without a key it is impossible to get in. Embarrassment is preprogrammed.

Sandra has played through the ENF theme very beautifully in her story “Stage Fright”: A young woman is asked to undress on stage during a rehearsal. And this, although this was not originally intended in the play at all. She must either face her embarrassment or bury her dream of a stage career. The director, who notices how she is becoming increasingly upset, urges her to go further and further.

I took a very similar path with the story “Svetlana”: a young woman gets involved with a guy who introduces her deeper and deeper into the world of S&M. But as time goes by she becomes more and more his trophy: she has to stay naked in the apartment even when his friends come to visit. He also goes further and further in his demands with time.

Here is a – probably incomplete – list of the reasons that come to my mind when a woman suddenly stands naked in an embarrassing situation:

ENF and the orgasm

On the other hand, some of these genre niches certainly offer opportunities for orgasms. In hypnosis settings, women are often made to experience orgasms on cue or by snapping their fingers, which can lead to mad situations, especially if the link is not broken at the end of the session. But I have also read stories in which the protagonist is simply asked to satisfy herself in a trance. Here, too, it can be embarrassing when the hypnotist in the meantime lifts the trance and the protagonist realizes what situation she is in.

Niches next to the ENF

Particularly in the sub-genre area, it is sometimes difficult to draw the boundaries of the niches cleanly. ENF often coincides with keywords such as OON (only one naked), CMNF (clothed man naked female) and NiP (naked in public). Here it simply depends on the focus of the author in which category a story belongs.

So my story “The Hunting Lodge” is a good example for CMNF and OON: Nina gets the opportunity to freshen up in a remote hunting lodge. She takes a shower and even gets an intimate massage afterwards. But all walls are equipped with Venetian mirrors, so that she can be observed by the other guests of the castle in any situation. Which drives her boyfriend, who has just discovered this, to the brink of madness. But since Nina cannot assume that she is being watched, she is not ashamed and behaves completely naturally. Therefore this is not an ENF story.

New ENF stories from us

Sandra and I have decided to work mainly in this niche genre ENF in the future. This was already apparent in our older texts. And we think it’s important that our texts don’t resemble surprise eggs, where it’s never clear what’s in them.

Sandra’s series “The Girls of Gamma Xi Delta” has even grown to several volumes. If you are interested in the hustle and bustle of Hamburg’s female students – and have a soft spot for ENF – you will surely love her books.