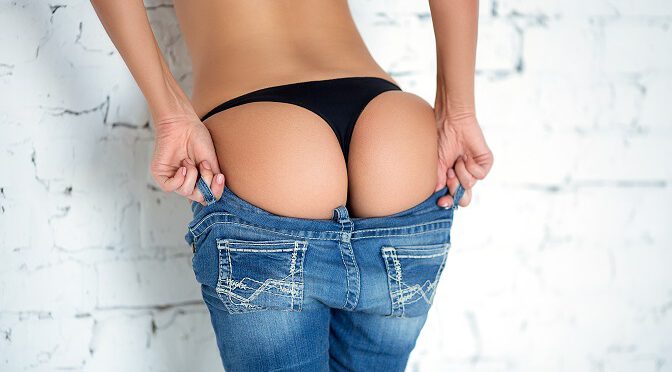 Have I really never bothered to describe a woman’s butt before? Right now I’m sitting on a new story and searching for words. And since I’m not really getting anywhere, I’m doing a little research on the Internet.

On wmn.de I find in the (german) article “These are the 5 different butt shapes: Which one do you have?” a first rough classification:

The article refers to a study conducted by the New York plastic surgeon, who inspected 50,000 women from 35 countries for this purpose.

According to him, the position of the pelvis and hip bones plays an important role in describing the pos. In addition, it is worth looking at how fat the buttocks are and how this fat is distributed. And, of course, it’s about how pronounced the musculature is and how the muscles are connected to the thigh bone.

Cosmopolitan also refers to this research, but under the question of which panties fit which butt shape.

But let’s go into detail:

The inverted heart shape is close to the ideal of the round butt, except that gravity has already done its part here and most of the fat accumulates in the lower part of the butt. The hip looks rounded but has much more volume in the lower part. In short words, the butt and hips are full, and the butt is low-set.

When the line between the pelvis and hips is angled inward, the butt takes on a “V” shape from behind. This butt shape is said to be common in women with broad shoulders and very narrow hips.

The reason for the pear-shaped butts is mostly the fuller thighs. The butt spreads below the hip bones and this leads to the stature often referred to as the “A” shape.

If you dream of a round butt, you can specifically help it by exercising. Because the apple shape is one thing above all: muscular. By the way, there are three gluteal muscles that not only shape the butt itself, but (together with the abdominal muscles) also influence the position of the pelvis: the small, medium and large gluteal muscles.

That leaves the rectangular butt, which is formed when the line between the hip bone and the outer thigh is perpendicular to the floor.

Admittedly, the above list makes it only marginally easier for an author to describe a butt in a way that doesn’t turn a reader off in the process. So I set out to find descriptions in fiction.

And indeed they do exist in literature – the shape descriptions from above:

“I remembered the heavy weight of her tits in my hands, the curves of her hips, her fantastic, heart-shaped butt.”

“And as she did, she squeezed it down with her square ass.”

“Number 16 is half a head shorter than me and taller only because she, too, wears platform shoes. Her lower body is stocky, her legs short, her bottom pear-shaped.”

What is most eye-catching about the shape is the amount of fat.

“Richie’s bony butt bounced wildly back and forth on the metal bar.”

“The way she leaned forward and the skirt around her hips tightened didn’t make him a bit nervous anymore. If anything, her bottom seemed a little too flat to him now.”

“Christian was right: she was very thin, but her butt was quite firm.”

In fact, her butt was thicker than I had expected. But it was certainly not nearly as fat as Jessye Norman’s.

“The legionnaire laughs and retorts, “You broads already have such a fat ass, and then the fat thing still isn’t soft enough!”

“Her butt was way too flared to fit in a jumpsuit. It barely fit in her chair, after all – if she stood up too quickly, she’d carry the thing around as a power warmer.”

“What are you thinking about right now?” inquired Stanley with a triumphant smile, having made it through the security check without adversity.
“Um … about your butt,” Dara admitted, rather than taking refuge in an innocuous remark about her flight, her gate number, or the weather in Dublin.
“On my butt?” repeated Stanley incredulously.
“Yep.” Good heavens, she didn’t even deny it.
“And what exactly were you thinking?” It sounded concerned as if Dara could have a low opinion of his butt.
“That he’s just great,” Dara said, trying to keep her tone as matter-of-fact as possible.
“And … why?” asked Stanley in consternation. He had probably never thought about the merits of his butt before
“Well, it’s nicely shaped and smooth and firm.“

“Young women have tight skin,” he explained, “their butts are round and tight, their bellies smooth and flat, their breasts plump and firm and still just where God wants them.”

“And just her ass … he had admired her toned buttocks in her tight jeans as she had climbed a flight of stairs in front of him, and he had imagined her stretching them out to him, begging him to penetrate the warm, seductive valley between them.”

Then there are the comparisons, which ultimately include apples and oranges. In the right context, however, they can evoke an image more easily than a detailed description:

“She was well-built, a voluptuous bosom stood out under the jacket with the gold buttons, and her bottom was as he liked it, with the silhouette of a pear. Not with that of an apple or a peach. Elongated, curved, somewhat flared.”

“She’s one of the kind of girls you think stalks, even when they go barefoot. And her bottom is a board.”

“In the short, flesh-colored lycra shorts, her butt looked like a sack of potatoes. That sort of thing ought to be outlawed, Charlie thought in disgust.”

If you want to, you can get relatively far by describing the shape. Even without a detailed description, terms like “apple butt,” “pear butt,” or “square ass” work, but have also degenerated into clichés in the meantime.

If you want to escape this, you can’t avoid saying a few words about the hips, pelvis, muscles and fat pads.

If I come across some nice examples from the literature, I will be happy to add them here. If you have a quote in mind that fits well into this collection, feel free to leave a comment on this post.