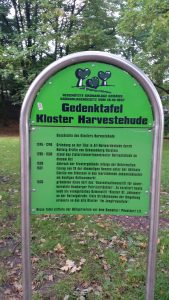 In Hamburg-Harvestehude a sorority, a so-called Greek letter society of young female students, founded their first chapter in Germany. The students do not only stand out on campus because of their unusual dress code.

They are based in Jungfrauenthal. In valle virginum – “Jungfrauenthal” is what the Cistercian nuns called their monastery in Harvestehude. Even today, numerous street names bear witness to the time when the convent extended over large areas of the district: Klostergarten (monastery garden), Abteistraße (abbey street), Nonnenstieg (nuns lane), Jungfrauenthal (virgin valley), and Frauenthal (womenfolks valley) are just a few of them. 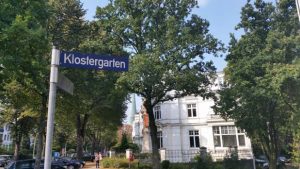 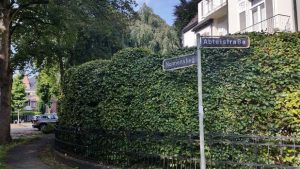 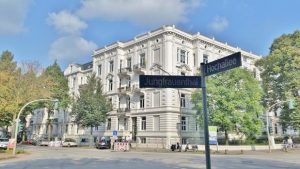 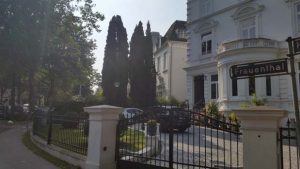 Here on the grounds of the old monastery, not far from the university and very close to the Alster lake, the American Gamma Xi Delta Sorority (ΓΞΔ) has established its first chapter in Germany. Sorities are Greek letter organizations of female students who usually all live in the same house, similar to a student dormitory, but with a greater claim to belonging together. The sororities are called “Greek” because they are usually named after three letters of the Greek alphabet.

Here is an excerpt from the book “The hot chair” about Gamma Xi Delta:

We all wear the same clothes. It is our distinctive feature on campus: Torn jeans and bodysuit. Only Danielle, our president, could come up with these idiosyncratic dress codes. She comes from Louisiana and was already a member of the Gamma Xi Delta Association there.
Bras are also forbidden. There are different reasons for this no-bra philosophy, but it would be too much to list them all here. Let’s agree that most of us find it more comfortable not to be forced into these uncomfortable things. We wore them out of a social convention. Hardly any of us have ever been stopped by our mother saying, “You’re not leaving my house like this!” – “Free the Nipple” is the slogan here.
Also, shoes and stockings are not allowed at least in the rooms of the villa. We should not neglect the feet, regularly take care of the nail polish and cornea. If you hide your feet in stockings, you easily tend to be sloppy in such things. This is the official explanation. Fortunately, there is underfloor heating in the whole house.
Here in Hamburg we are the first Sorority. The first chapter. Danielle is our founder, so to speak. She originally wanted to study in the Old World for a few semesters only, to broaden her horizon. But without her sisters and without her own house she quickly became bored. Whoever is used to living in a sorority soon doesn’t want to miss this kind of living together, she once explained to us.
And so she talked for a long time on the phone with her motherhouse and some alumni until she had the permission and the money to found a colony. She found the villa in Harvestehude, right on the Alster, and bought it with the support of the head office. At present, thirty-four students live here, but there is room for fifty or so. I don’t know who used to live here, but they had lots of rooms – and the corresponding rooms for the service staff.

New members are initiated after a two-part selection process: During the rush, the interested students have the opportunity to get to know the sorority better. For this purpose, there are special events where members and interested students can get a taste of each other. Usually, this phase also includes a detailed interview with the newcomers. At the end of the rushing, those members who feel that they might fit into the group receive an offer: the bid.

Gamma Xi Delta allows time for the second, the Pledge phase. The selected new members can live in the villa for a semester but are under special observation. Group evenings take place on Wednesdays and Sundays. There the seriousness of their desire to become members is put to the test. Their confidence is tested in various exercises. Not infrequently, limits are also consciously sounded out. At the end of the semester, there is the so-called hell week, in which the pledges are once again demanded everything from them. Because only those who are one hundred percent behind Sorority have a chance to become a member.

In my new New Adult series “The girls of Gamma Xi Delta” I tell about everything that happens in the villa. About the friendships that develop there, as well as about the quarrels. And of course about the group evenings and the trials that are imposed on potential new members.

This is how it goes in the first volume about Nina, who ends up on the “hot chair” at one of these group sessions. Whoever sits there is in the focus of the group. Each participant gives written feedback. These slips of paper are later read aloud without the person on the chair being allowed to justify herself. But for Nina it gets even worse: She is asked to sit naked on the chair. The other students are asked to write down what they would like to do with her if they let their imagination run wild. What they do not know yet: The exec’ board will use this evening to put some of these fantasies into practice.

In the preferences you can learn which cookies we use or turn them off.

This website uses cookies so that we can provide you with the best user experience possible. Cookie information is stored in your browser and performs functions such as recognising you when you return to our website and helping our team to understand which sections of the website you find most interesting and useful.

Strictly Necessary Cookie should be enabled at all times so that we can save your preferences for cookie settings.

If you disable this cookie, we will not be able to save your preferences. This means that every time you visit this website you will need to enable or disable cookies again.